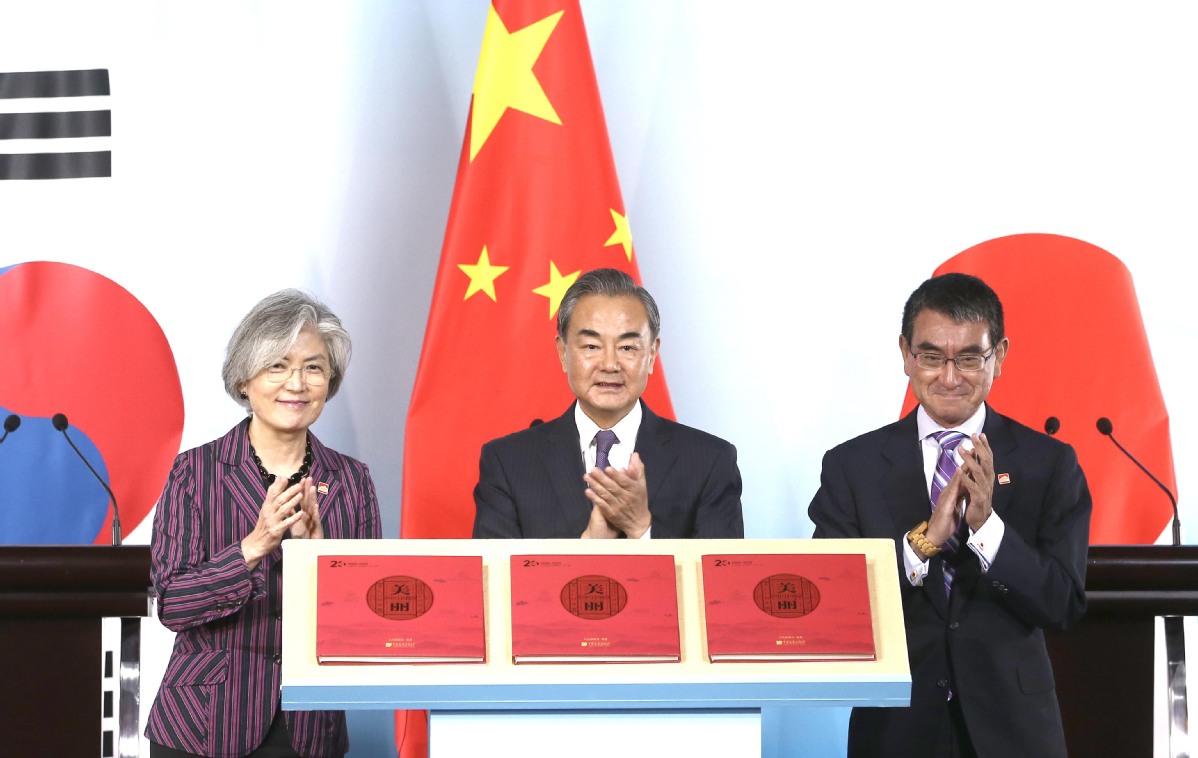 China, Japan and the Republic of Korea vowed on Wednesday to advocate multilateralism and promote regional peace, making their cooperation the cornerstone of Northeast Asia's prosperity and stability.

They also agreed to maintain bilateral ties and actively promote trilateral cooperation, and speed up negotiations on the Regional Comprehensive Economic Partnership and the China-Japan-ROK free trade agreement, to jointly safeguard free trade.

"China will continue to resolutely promote all-around opening-up, … which will absolutely bring new opportunities for the development of the ROK and Japan as well as providing broad space for trilateral cooperation," Wang said at a news conference after the meeting.

According to Wang, they also agreed on the necessity of strengthening communication and coordination on macroeconomic policy among the three countries and building an open world economy given the downward pressure faced by the global economy.

China, Japan and the ROK are the world's second-, third- and 11th-largest economies, with their total GDP accounting for about 20 percent of global GDP.

"We believe that, as important manufacturing and innovation countries, China, Japan and the ROK should strengthen cooperation in such areas as big data, artificial intelligence and 5G," Wang said, adding that China's initiative to make 2020 the China-Japan-ROK innovation cooperation year was positively responded to by the other two sides.

Kang said at the news conference that it is important to explore and expand cooperation to enable the people of the three countries to earnestly feel the benefits brought by trilateral cooperation.

The meeting also approved a concept paper on "Trilateral +X" cooperation, which aims to share successful experiences with other countries and promote common development.

This year marks the 20th anniversary of the China-Japan-ROK cooperation mechanism. And there was a two-year gap between this year's meeting and the previous one in 2016.

Zhuang Rui, a professor of Asia-Pacific economics at the University of International Business and Economics in Beijing, said the meeting, which came amid tensions in bilateral ties and the trend of anti-globalization, helped to boost confidence and expectations for regional development and the global economy.